“I believe the ability to think is blessed. If you can think about a situation, you can deal with it. The big struggle is to keep your head clear enough to think.”

Richard Pryor was a groundbreaking African-American comedian and one of the top entertainers of the 1970s and ‘80s.

Born on December 1, 1940, in Peoria, Illinois. A skilled social satirist with a fondness for profanity, Richard Pryor was a groundbreaking African-American comedian who became one of the top entertainers of the 1970s and ‘80s. He got a rough start in life. His mother reportedly worked as a prostitute and his father was a bartender and boxer who served in the military during World War II. His parents married when he was three years old, but the union did not last. 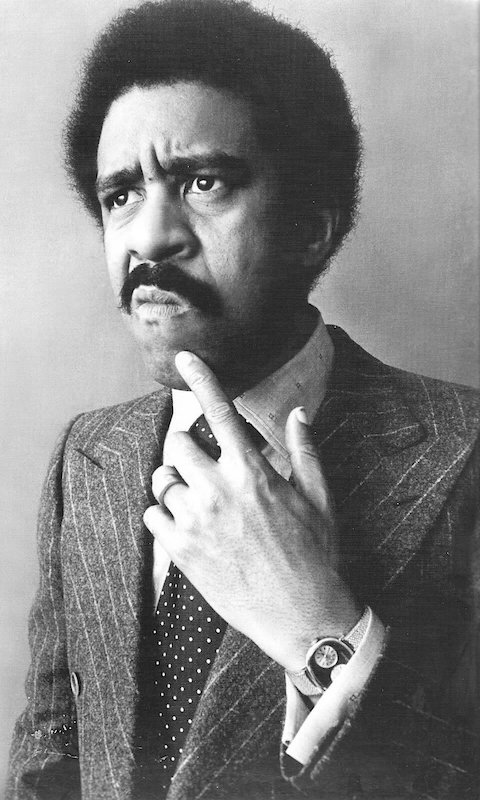 For much of his youth, Pryor was left in his grandmother's care and lived in the brothel she ran. He also experienced sexual abuse as a child, according to his official website. To step away from the grim reality of his life, Pryor found solace in going to the movies.

At school, Pryor played the part of the class clown. He went on to discover acting in his early teens. A natural performer, Pryor was cast in a production of Rumplestiltskin by Juliette Whittaker, the director of a local community center. She believed in his talent and encouraged him throughout the years.

At the age of 14, Pryor was expelled from school and ended up working a string of jobs until he joined the military in 1958. He served in the army for only two years–he was discharged for fighting with another soldier.

Upon his return home, Pryor married Patricia Price in 1960. The couple had one child together before divorcing. After ending his marriage, Pryor pursued a career as an entertainer. He found work as a comic throughout the Midwest, playing African American clubs in such cities as East St. Louis and Pittsburgh.

In 1963, Pryor moved to New York City. The following year, he made his television debut on the variety show On Broadway Tonight. More guest appearances followed on such shows as The Merv Griffin Show and the Ed Sullivan Show. At the time, his act was modeled after two African American comedians he admired, Bill Cosby and Dick Gregory.

By the late 1960s, Pryor had landed a few small parts on the big screen, appearing in The Busy Body (1967) and Wild in the Streets (1968). He also released his first self-titled comedy album around this time. Pryor even gave marriage another try–he wed Shelly Bonus in 1967. (The couple had one child together–a daughter named Elizabeth–before divorcing in 1969.)

Pryor toured extensively, doing his stand-up act. Playing Las Vegas, he served as Bobby Darin's opening act at the Flamingo Hotel for a time. He reached an interesting career turning point while playing at the Aladdin in the late 1960s. Tired of the constraints and limitations on his material, Pryor walked off stage and took a break from stand up. He retreated to Berkeley, California, where he met a variety of counterculture figures, including Black Panther leader Huey P. Newton.

In the early 1970s, Pryor scored several successes as an actor and comedian. He earned positive reviews for his supporting role in the Billie Holiday biopic Lady Sings the Blues (1972) starring Diana Ross. In 1973, he netted his first Emmy Award nomination (outstanding writing achievement in comedy, variety) for his work on The Lily Tomlin Show.

The following year, Pryor took home his first Emmy (best writing in comedy, variety) for another collaboration with Lily Tomlin: the comedy special Lily (1973). Pryor also wrote for such shows as The Flip Wilson Show and Sanford and Son, which starred comedian Redd Foxx.

Continuing to thrive professionally, Pryor worked with Mel Brooks on the screenplay for western spoof Blazin' Saddles (1974). His own work was also attracting a lot of attention. Despite its X-rated content, his third comedy album sold extremely well and the Grammy Award for Best Comedy Recording in 1974–a feat that he repeated over the next two years.

Comedy fans–of all racial backgrounds–were captivated by Pryor's comedy, which consisted of situational and character-driven humor–not straightforward jokes. He poked fun at the white establishment and explored the racial divide. In one bit, Pryor describes how differently the horror film The Exorcist would have been if it had featured an African American family instead of a white one. Another routine about Muhammad Ali covered how white people never gave Ali enough credit as a fighter. 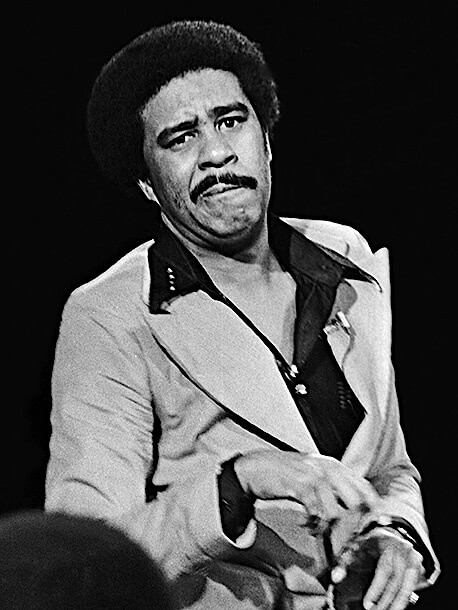 By the late 1970s, Pryor had a thriving career as an actor. He starred in the box office hit Silver Streak (1976) with Gene Wilder and Jill Clayburgh. Pryor went on to play the first African American stock car racing champion in Greased Lightning (1977) with Beau Bridges and Pam Grier. He and Grier were involved off-screen for a while before Pryor married his third wife, Deboragh McGuire, in 1977. (They separated after a short while and officially divorced in 1979.)

Off screen and off stage, Pryor had a long history of substance abuse and stormy relationships. In 1978, Pryor had another run-in with the law after he shot his estranged wife's car. He was on put on probation, fined, and ordered to get psychiatric treatment and make restitution. Four years earlier, Pryor had gotten into legal trouble for failing to file tax returns from 1967 to 1970. He received a fine and probation.

His health began to suffer. He had his first heart attack in 1978. After this health crisis, Pryor started work on what has been considered by many critics to be his finest performance. The film Richard Pryor: Live in Concert (1979) garnered a lot of praise and sold out at many urban movie theaters. That same year, Pryor traveled to Kenya and after that visit he announced that he would no longer be using the n-word in his act.

Pryor reteamed with Gene Wilder for the popular crime comedy Stir Crazy (1980), which was directed by Sidney Poitier. The film was a huge hit at the box office, earning more than $100 million.

His drug use spiraled out of control the following year. In June 1980, after several days of freebasing cocaine, he lit himself on fire in a suicide attempt. It was initially reported as an accident, but he later admitted in his autobiography that he had done it on purpose in a drug haze. He had third-degree burns on more than 50 percent of his body. Reflective of his comic style, Pryor found the humor in his own suffering. “You know something I noticed? When you run down the street on fire, people will move out of your way.”

After a lengthy recovery, Pryor returned to stand up and acting. He won two more Grammy Awards for Best Comedy Recording–one for Rev. Du Rite in 1981 and one for Live on the Sunset Strip in 1982. Live on the Sunset Strip was also released as a concert film that same year. He also starred in several films, including Some Kind of Hero (1982) with Margo Kidder and The Toy (1982) with Jackie Gleason. Marrying for the fourth time, Pryor wed Jennifer Lee in 1981, but the couple divorced the following year.

In 1983, Pryor became one of the highest-paid African American actors at the time. He took home $4 million to play an evil henchman in Superman III–reportedly earning more than the film's star Christopher Reeve. He drew from his own life experience for another important project from this era–Jo Jo Dancer, Your Life Is Calling (1986).

In the autobiographical film, he played a popular stand-up comic who takes a look at his life while recuperating in a hospital after suffering serious burns in a drug-related incident. Around this time, Pryor was briefly married to actress Flynn BeLaine. (The couple made another short-lived attempt at marriage in the early 1990s, as well.)

The following year, Pryor was diagnosed with multiple sclerosis, a disease that affects the central nervous system. He did the best he could to not let the degenerative illness slow him down, starring in several movies, including Critical Condition (1987), See No Evil, Hear No Evil (1989) with Gene Wilder, and Harlem Nights (1989) with Eddie Murphy and Redd Foxx. By the early 1990s, however, once kinetic Pryor was confined to a wheelchair. Still he kept performing stand-up and acting.

He wrote his autobiography, Pryor Convictions: And Other Life Sentences (1995) with Todd Gold, which earned critical acclaim. That same year, he appeared in an episode of the medical drama Chicago Hope with his daughter Rain as a man with multiple sclerosis. His last film appearance was in David Lynch's Lost Highway (1997).

Pryor became the first person to receive the Mark Twain Prize for American Humor from the Kennedy Center in 1998. He said at the time, “I am proud that, like Mark Twain, I have been able to use humor to lessen people's hatred.”

In 2001, Pryor remarried Jennifer Lee. He spent his final years with her at his California home. Outside of performing, Pryor was an advocate for animal rights and opposed animal testing. He established Pryor's Planet, a charity for animals.

On December 10, 2005, Pryor died of a heart attack at a Los Angeles area hospital. He paved the way for such comedians as Eddie Murphy, Chris Rock, and countless others. “Pryor started it all. He made the blueprint for the progressive thinking of black comedians, unlocking that irreverent style,” comedian and filmmaker Keenen Ivory Wayans explained to The New York Times.