The Tuskegee Airmen were the first black military aviators in the U.S. Army Air Corps (AAC), a precursor of the U.S. Air Force. Trained at the Tuskegee Army Air Field in Alabama, they flew more than 15,000 individual sorties in Europe and North Africa during World War II. Their impressive performance earned them more than 150 Distinguished Flying Crosses, and helped encourage the eventual integration of the U.S. armed forces.

Segregation in the Armed Forces

During the 1920s and ‘30s, the exploits of record-setting pilots like Charles Lindbergh and Amelia Earhart had captivated the nation, and thousands of young men and women clamored to follow in their footsteps.

But young African Americans who aspired to become pilots met with significant obstacles, starting with the widespread (racist) belief that black people could not learn to fly or operate sophisticated aircraft.

In 1938, with Europe teetering on the brink of another great war, President Franklin D. Roosevelt announced he would expand the civilian pilot training program in the United States.

At the time, racial segregation remained the rule in the U.S. armed forces ‐ as well as much of the country. Much of the military establishment (particularly in the South) believed black soldiers were inferior to whites, and performed relatively poorly in combat. 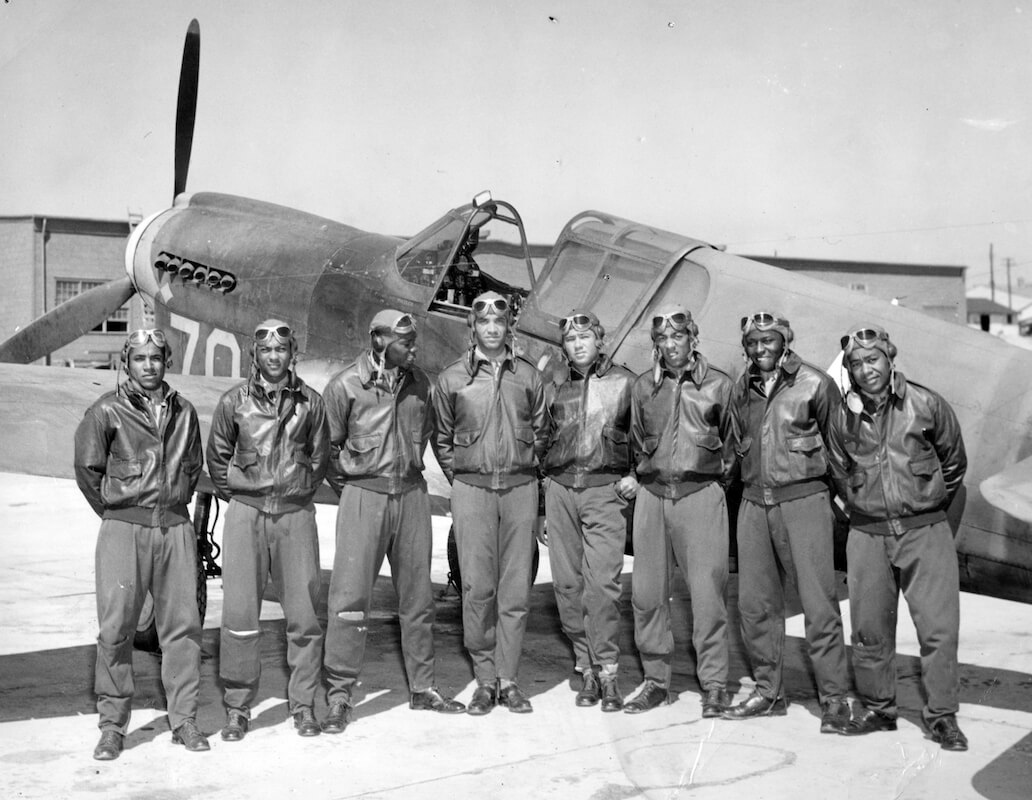 But as the AAC began ramping up its training program, black newspapers like the Chicago Defender and Pittsburgh Courier joined civil rights groups like the NAACP in arguing that black Americans be included.

In September 1940, Roosevelt’s White House responded to such lobbying campaigns by announcing that the AAC would soon begin training black pilots.

For the training site, the War Department chose the Tuskegee Army Air Field in Tuskegee, Alabama, then under construction. Home to the prestigious Tuskegee Institute, founded by Booker T. Washington, it was located in the heart of the Jim Crow South.

The program’s trainees, nearly all of them college graduates or undergraduates, came from all over the country. In addition to some 1,000 pilots, the Tuskegee program trained nearly 14,000 navigators, bombardiers, instructors, aircraft and engine mechanics, control tower operators and other maintenance and support staff.

Among the 13 members of the first class of aviation cadets in 1941 was Benjamin O. Davis Jr., a graduate of West Point and the son of Brig. Gen. Benjamin O. Davis, one of two black officers (other than chaplains) in the entire U.S. military.

The “Tuskegee Experiment” took a great leap forward in April 1941 thanks to a visit by Eleanor Roosevelt to the airfield. Charles “Chief” Anderson, then the chief flight instructor in the program, took the first lady on an aerial tour, and photos and film of that flight helped publicize the program.

In April 1942, the Tuskegee-trained 99th Pursuit Squadron deployed to North Africa, which the Allies had occupied.

In North Africa and then Sicily, they flew missions in second-hand P-40 planes, which were slower and more difficult to maneuver than their German counterparts. After the commander of the 99th’s assigned fighter group complained about the squadron’s performance, Davis had to defend his men before a War Department committee.

Rather than being shipped home, the 99th was moved to Italy, where they served alongside the white pilots of the 79th Fighter Group. In early 1944, pilots from the 99th shot down 12 German fighters in two days, going some distance toward proving themselves in combat. 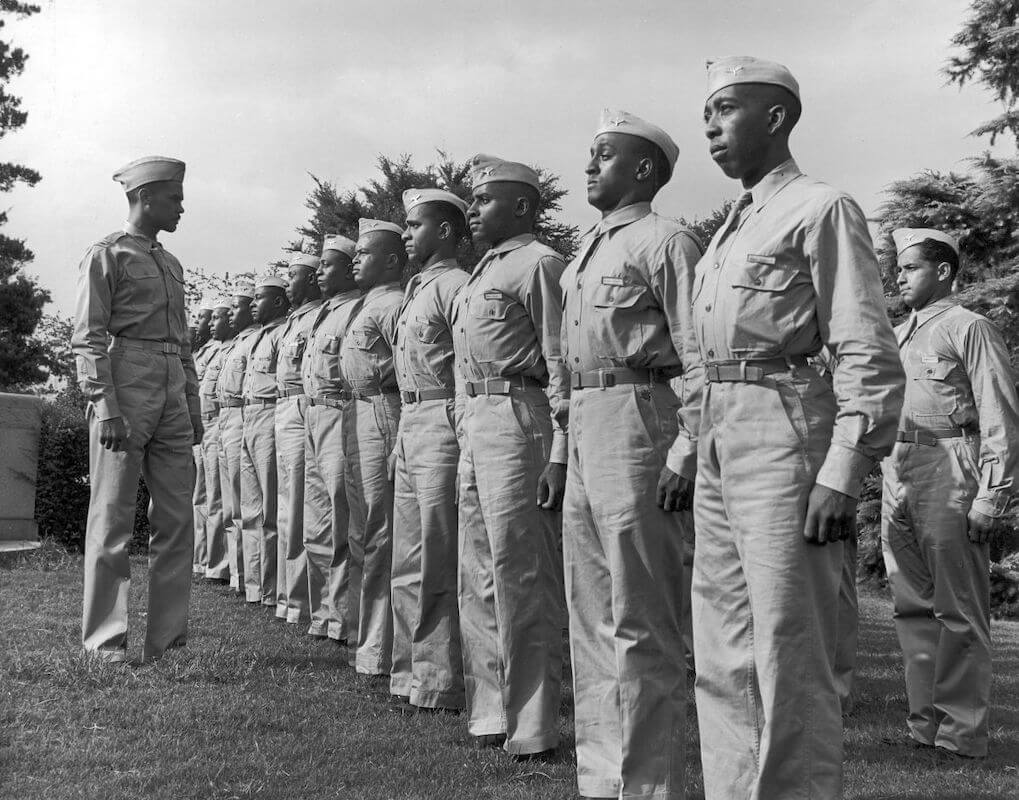 In February 1944, the 100th, 301st and 302nd fighter squadrons arrived in Italy; together with the 99th, these squadrons of black pilots and other personnel made up the new 332nd Fighter Group.

After this transfer, the pilots of the 332nd began flying P-51 Mustangs to escort the heavy bombers of the 15th Air Force during raids deep into enemy territory. The tails of their planes were painted red for identification purposes, earning them the enduring nickname “Red Tails.”

Though these were the best-known of the Tuskegee Airmen, black aviators also served on bomber crews in the 477th Bombardment Group, formed in 1944.

A popular myth arose during the war ‐ and persisted afterwards ‐ that in more than 200 escort missions, the Tuskegee Airmen had never lost a bomber. The truth wasn’t uncovered until years later, when a detailed analysis found that enemy aircraft shot down at least 25 bombers they escorted.

Nonetheless, that was a much better success rate than other escort groups of the 15th Air Force, which lost an average of 46 bombers.

By the time the 332nd flew its last combat mission on April 26, 1945, two weeks before the German surrender, the Tuskegee Airmen had flown more than 15,000 individual sorties over two years in combat.

They had destroyed or damaged 36 German planes in the air and 237 on the ground, as well as nearly 1,000 rail cars and transport vehicles and a German destroyer. In all, 66 Tuskegee-trained aviators were killed in action during World War II, while another 32 were captured as POWs after being shot down. 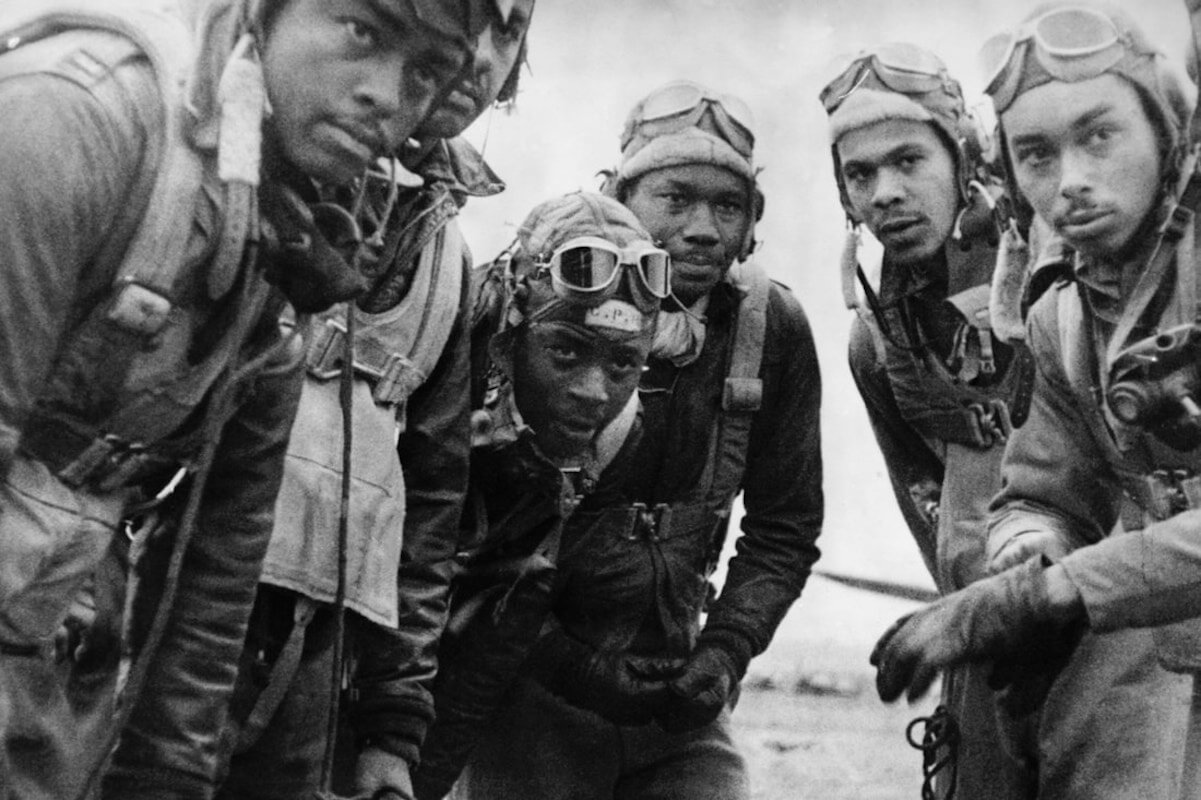 After their brave service, the Tuskegee Airmen returned home to a country where they continued to face systematic racism and prejudice.

But they did represent an important step forward in preparing the nation for the racial integration of the military, which began with President Harry Truman who issued Executive Order 9981 desegregating the U.S. Armed Forces and mandating equality of opportunity and treatment on July 26, 1948.

More than 300 of the original Tuskegee Airmen were on hand to receive the Congressional Gold Medal from President George W. Bush in 2007.

Two years later, the surviving Tuskegee-trained pilots and support crew were invited to attend the inauguration of the nation’s first African-American president, Barack Obama, who once wrote that his “career in public service was made possible by the path heroes like the Tuskegee Airmen trail-blazed.”

The Harlem Renaissance, also known as the “New Negro Movement”, was an intellectual, social, and artistic explosion centered in Harlem, New York, spanning the 1920s. The movement also included the new African-American cultural expressions across the urban areas in the Northeast and Midwest United States affected by the Great Migration, of which Harlem was the largest.

The Civil Rights Movement in the United States was a decades-long struggle with the goal of enforcing constitutional and legal rights for African Americans that white Americans already enjoyed. With roots that dated back to the Reconstruction era during the late 19th century, the movement achieved its largest legislative gains in the mid-1960s, after years of direct actions and grassroots protests that were organized from the mid-1950s until 1968.